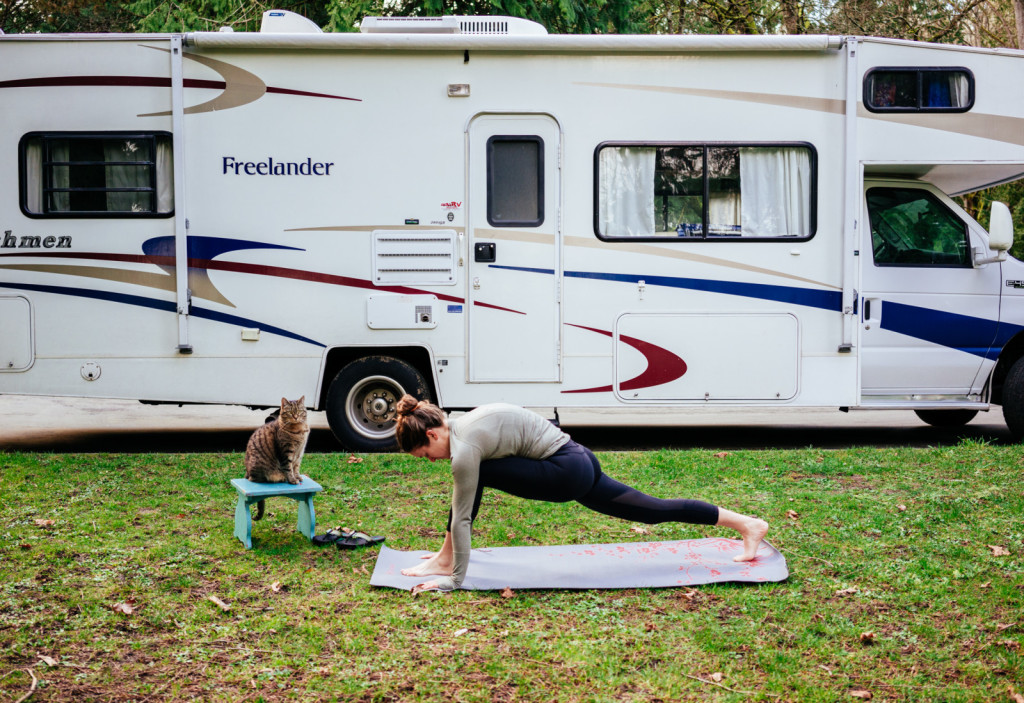 Filed under: Lifestyle, Inside Look

No one has to tell Ellen Sims that Seattle rents aren’t affordable.

The massage therapist and nonprofit executive knows firsthand that for many people, it’s impossible to pay rent here and get ahead.

That’s why she extracted herself from the rent race a year ago, plunking $2,000 down on a recreational vehicle that now costs her a manageable $240 a month – plus roughly $300 in insurance, propane and gas, depending on the season and her travel plans.

‘I’m not stressed out, and that’s priceless’

“For living alone, I pay about a third to a fourth of what other people are paying, so it’s affording me the ability to pay off debt and save money at the same time, so that I can hopefully get to purchase some land,” Sims said.

She specializes in craniosacral therapy, runs a nonprofit that provides free health care to homeless and low-income people, and teaches wellness and mindfulness to University of Washington law students – all part of a broader aim (via her company, Divine Roots Wellness) to encourage the world to slow down and be well.

Sims notices how tense her clients are from working so much.

“We have an epidemic of stress that’s causing a lot of problems,” she said. “People are on edge, and when we allow ourselves time to relax, that’s when we digest and can sleep.”

She’s relieved that the RV has eased her money worries and made it possible for her to relax and spend time on projects she finds meaningful.

“I’m not constantly checking how much I have. I’m not stressed out, and that is literally priceless,” she said.

The ramifications are dire for a region that was historically blue-collar and not prone to the same sky-high housing prices as other coastal hubs.

This past year, Seattle and its surrounding county saw a major increase in homelessness. Even before five people were shot in “The Jungle,” a longtime homeless encampment, this winter, Seattle’s mayor issued a homeless-emergency order to create two safe-parking lots for people who live in vehicles.

Sims clearly isn’t the only Seattleite who’s taken up RV living in the face of skyrocketing rents.

All over the city, people are cobbling together nontraditional living situations that address their financial strain and, in the process, give them greater peace of mind.

‘A different set of conversations’

Reba Wirtel says she hardly remembers not “living in community,” with multiple roommates sharing the bills and often a particular lifestyle.

For the past few years, she has lived with her teenage daughter, Alli, in a rented home with a single mom, her daughter and, typically, three other roommates. They are among the 32 percent of working-age adults nationally who live with people to whom they are not married or partnered.

“Doubling up” has increased over the years and is particularly common in pricey markets.

The foundation of Wirtel’s community is nonviolent communication, a style that assumes good intent and that whatever is upsetting or not working can be handled with a conversation, or several.

“I’ve found that eliminates so much stress and confusion and chaos in my life,” Wirtel said.

The community shares the cooking, which means that “four nights a week, there are homemade meals being cooked, and I’m not part of that at all but get to come upstairs and have a delicious meal, and it’s incredible,” she said.

They also split the rent, which recently rose to $2,500 a month.

“Seattle housing is just so outrageous. If we were not living in community, I’d probably be having a different set of conversations with my husband, because I don’t think Alli and I could live,” said Wirtel, a longtime counselor/social worker who now runs the business side of Be-Possible.com.

For now, she doesn’t live with her husband, who’s busy running another intentional community – of artists. She lived there for a while, but she decided artists’ 24-7 hours were not ideal for raising Alli.

Her husband, Michael Craft, is committed for a while to managing a 25-bedroom artists’ enclave called InArtsNW, or “The In” for short.

Rents start at about $625 a month, and Craft says he’s “been preaching the goal of quitting your job and making money at your passion, because you’ll have much more time to follow your passion if you’re not giving 8-plus hours away to the corporatocracy.”

A few people were already making a living as artists when they arrived; for others, “it’s a process,” he said.

Craft is aware that The In is one of the least expensive places to live in Seattle and says there’s no shortage of people wanting a room there.

The home has two kitchens, 12 toilets, four or five showers and a couple of bathtubs.

“You’d never know you live with 30 people,” he said. “Everybody has a busy life and different schedules.”

Although the enclave used to host five musical shows a night – and got into some trouble for it – things are different now, and residents are not permitted to make noise in the middle of the night on weeknights, Craft said.

The community has been trying for a while to raise money for a down payment on the home, largely to stave off fears of a future sale to a developer.

Craft figures they need about $1 million, but they stopped active fundraising because “it was like trying to herd cats,” and the pot stands at just over $1,500.

That’s one pressure that Sims sidesteps by living in an RV.

“At one point,” she said, “I started looking at apartments again after being in here, and as I was looking, I just realized that it wasn’t worth it to me anymore.”